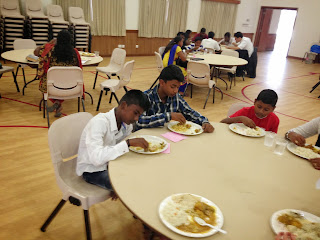 April started out with General Conference.  I slept through every session,  Curtis said that was nothing unusual.  The Saturday morning session started here at 9:30 at night, so we listened to President Eyring's and President Packer's talks, and then went to bed.  We had our regular church meetings the next day.  The following Saturday, we met at the church at 10:00 and watched recordings of the first 2 Saturday sessions.  They then served an Indian meal.  It is rice with a spicy sauce.  They're different sauces, some with chicken and some vegetarian.  As you can see in the picture at the right, the Indians don't use silverware.  We brought our own spoons. 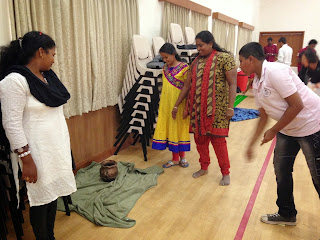 After the meal they asked us if we could organize an activity that would get everyone moving around.  One purpose was to prepare them for the next two hour session.  The men then went to the Priesthood Session and the Sisters to the Relief Society Session.

Our activity was a Grandma Pett type carnival. We had six different activities where the people could win tickets and then turn them in for prizes--primarily candy.  Here they are throwing rupees into a flower pot. 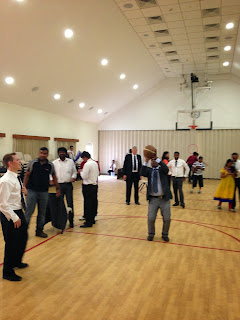 We also thought it would be good to try a few American games.  One Elder had a football, so it was fun to educate the Indians about the right way to throw a football,\ We had a hula hoop ring set up to throw it through.  We also had basketball, of course, since this is the standard for churches, even if the natives don't play basketball.  Some learn on their missions and can play fairly well.  This is our district president taking a shot.  We also set up a bowling alley with water bottles as pins and a soccer ball to knock them down.  We also let people earn points by jumping rope. 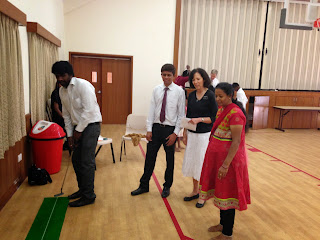 And of course we had to include golf.  Once again, very few had ever tried it.  Overall, we had a lot of fun and passed out a lot of candy.

One highlight of conference was that Robert William, a member of our branch was called to be an Area Seventy.  He is the first Indian to be called to this position.  He is the director of the church administrative office for India.  The office is located on the second floor in our building, so we work with several of the church employees here.

We enjoyed conference and the many great messages given. It was appropriate at Easter to have many focus on the Savior and atonement.  We also learned we must dance with the music, choose to believe and hush our fears with correct knowledge and faith in Jesus Christ who is the only source of enduring peace.  President Monson's comments about temples made us all hope one would be here in India soon.  We assume Curtis took notes on the directions given to young single men. 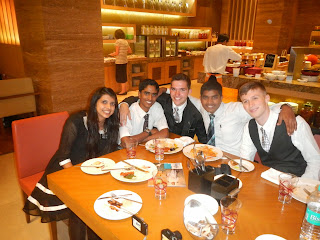 April was also the month we said our farewells to a lot of great missionaries we grew to love. Sister Arora is from Delhi.  She stayed with us several times when she came to the mission home for leadership meetings.  She attends BYU Idaho, studying mechanical engineering.  Kade, say hello if you see her.  Elder Stephen is next. We got to know him quite well as he was an Assistant.  He has quite a good sense of humor, and we enjoyed joking with him.  Elder Mangum was a zone leader in Hyderabad, so we didn't have as much contact with him, but enjoyed the times we did deal with him.  Next is Elder Dondapoti, who is from a village called Rajahmundry.  He was a zone leader in Bangalore, so we also enjoyed working with and 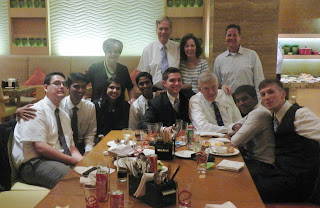 joking around with him.  The last is Elder
Anderson, who was an Assistant for the first two
months we were here.  He was a very effective missionary, too.   So, we lost a lot of great leaders on this transfer.  This picture also includes a neighbor of Sherry Christensen that came to church and then happened to be at the Marriott restaurant at the same time. 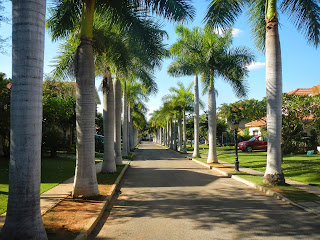 This is a view of going down the street where Sam Jackson lives.  The next picture is Sue at his front door.  No, this is not a typical Indian street for any of you that might be wondering. The Jacksons have been very kind to us here, and we have been to their house for dinner four times. Other than Sue's home cooking, one of the best places we have found to eat here in India is the Jacksons.  We also enjoy playing grandparents to their 3 children, ages 10, 7, and 1. 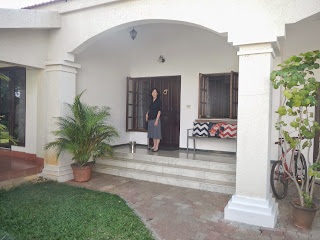 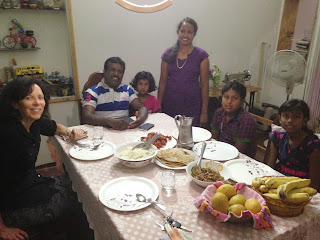 We really enjoy our chances to visit the members.  We spent a nice evening with our new Branch President Abel.  One custom that is a little uncomfortable to us is that the wife doesn't eat with us.  Her job is to serve the guests, and then she eats afterwards. President Abel joined the church in the mid 1980's and served a mission in 1988-89.  At that time there were 12 missionaries and a few couple missionaries in India.  They held church in the couple's apartment, or the missionaries apartment. Sometimes, he said he and his companion were the only ones in attendance.  During Christmas time one year he and his companion tracted out houses that had Christmas decorations.  He found a man who is now the first stake president in India, President Gutty of the Hyderabad Stake. President Abel is an advocate, the name for lawyer here.  He didn't find his wife until he was in his early 30's, but they now have 3 children.  His son was just ordained a deacon. 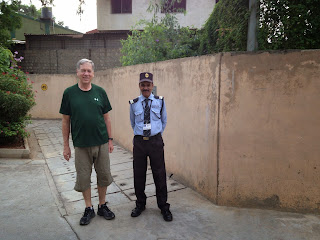 We have made friends with a lot of the guards as we go for our walks around the apartment complex. They give us a smile, a salute, and a "Good morning, sir!"  Their English is very limited. They work 12 hour shifts 7 days a week.  I think they make between $100 and $150 a month. 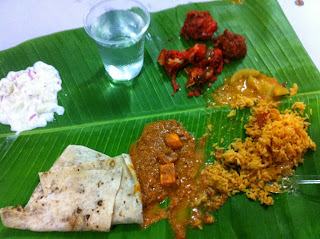 Janae, here is an idea for your wedding food. Mom had this at a recent wedding she went to while I was out of town.  It is a washed banana leaf for a plate, with rice, gravy, milk curd, chapati (similar to a tortilla), among other things. Can you find a fork or spoon in the picture? 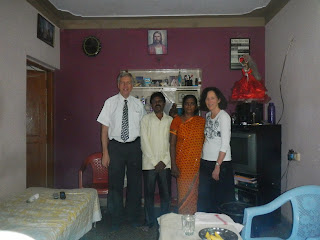 This is Brother Thomas and his wife Mary Royala.  We enjoyed the chance to teach the temple preparation class to about 5 couples. They were in the class and plan to go to the Hong Kong temple in October.  They have two sons, one a returned missionary Avenash, who was a counselor in the previous branch presidency.  The other son, Selwyn, is planning to serve a mission soon. Both sons were at work at a call center when we went to their home this night for dinner.  They had both eaten before we came, so that she could be a very attentive server for us.  Although their English is a little limited, they have been very faithful members about twelve years. Thomas told us of an experience he had just a few weeks after being ordained a Elder.  His sister was taken to the hospital with serious kidney problems,  She wasn't expected to live for the rest of the day.  Thomas gave her a blessing, she recovered and left the hospital that day.  She is still alive and doing well, 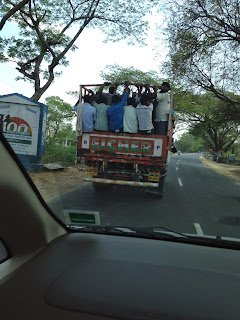 Here is my transportation picture for this blog.  I took this as I was on one of my apartment trips this month.  The truck is full of people just hanging on--no seat belts or car seats here. 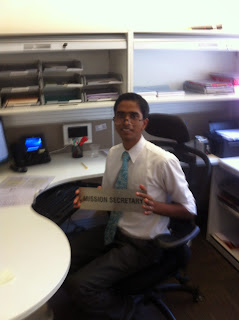 This is Elder Stephen, aspiring to take over Sue's job as the Mission Secretary. He hopes to go to school in the States after his mission which we hope he does so you can all meet him.

Well we haven't written about all the bills we pay, the government agencies we deal with, or the hours spent trying to resolve an issue with either a phone or an apartment maintenance problem.  We are happy and healthy and learning so much.  Thanks for all your love, support and prayers!
Posted by Unknown at 11:24 AM