We have continued our work at the mission office.  Some things are getting easier, but we are still learning a lot of patience in working with the Indian process to get things done.  We have also been busy on the weekends.  On the third Sunday in February, Sue got to give a talk in Sacrament Meeting.  She remembered President Walker's talk around the Chutes and Ladders game, so she prepared a similar talk.  On Saturday night she decided to google it to learn more about the game. She then learned it originated from an Indian game of Snakes and Ladders from the 2nd century BC.  I taught Elders' Quorum that day.  It was my turn to give a talk in Sacrament Meeting the next Sunday, and then we taught a Temple Preparation class to four couples, who are preparing to go.  The following Sunday President Berrett invited us to go to Sri Lanka to welcome a new senior couple and say farewell to another.  We spent very little tourist time, but had a great weekend. 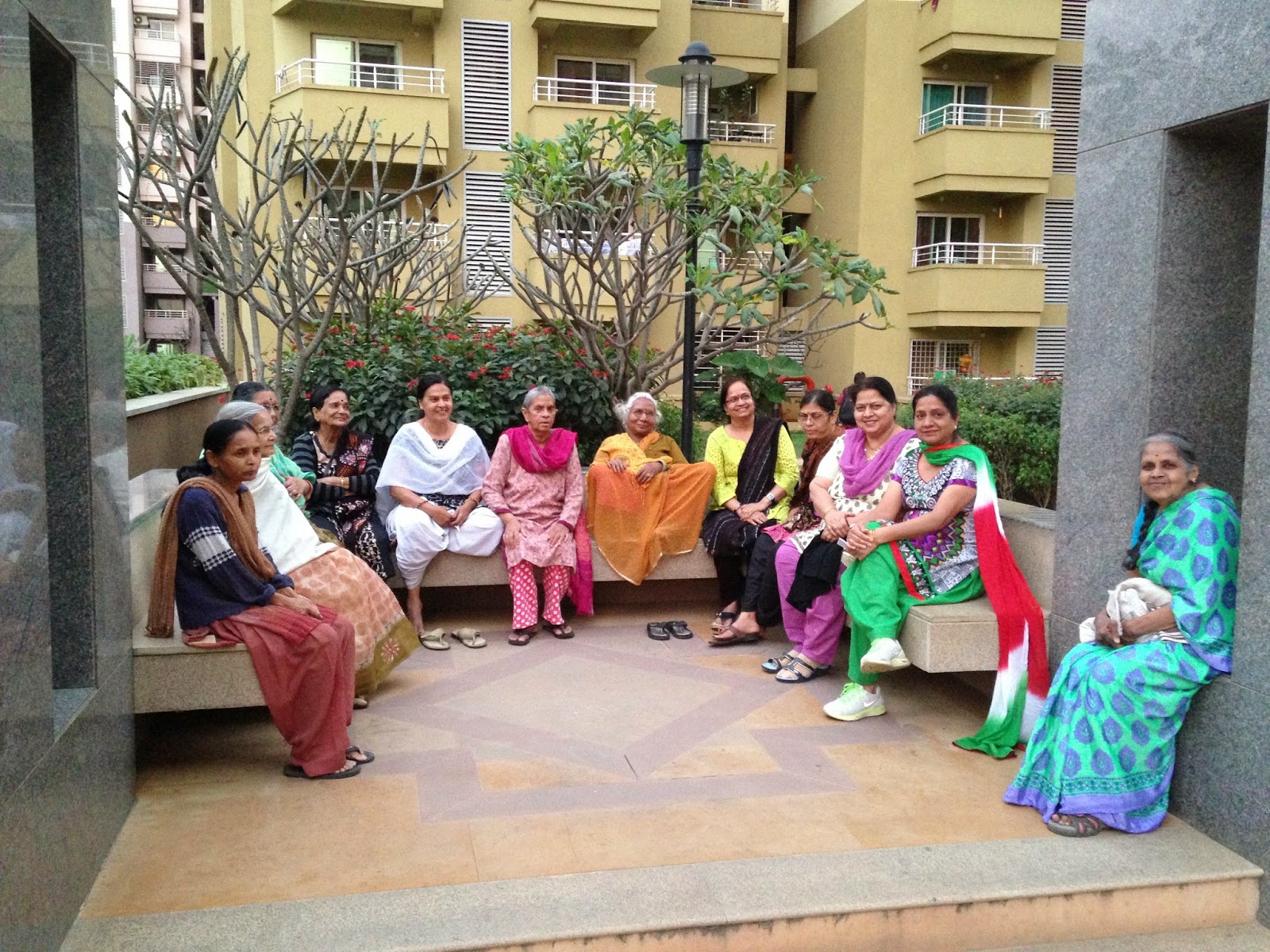 The "Relief Society" is frequently in session as we return home each night.  Several ladies gather each night for a couple of hours, talking about many important subjects.  Sue will join them after she gets her sari (Indian dress). 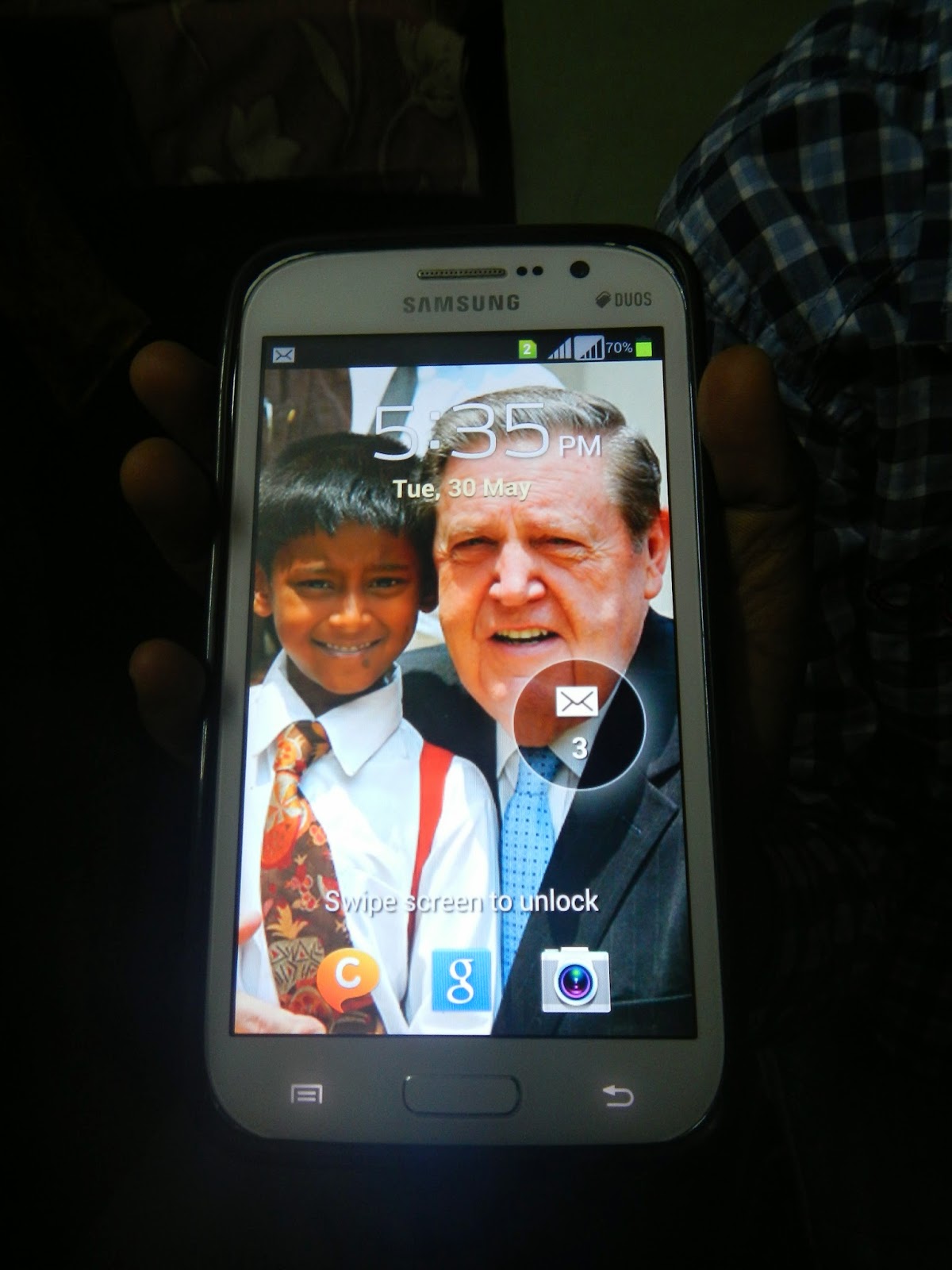 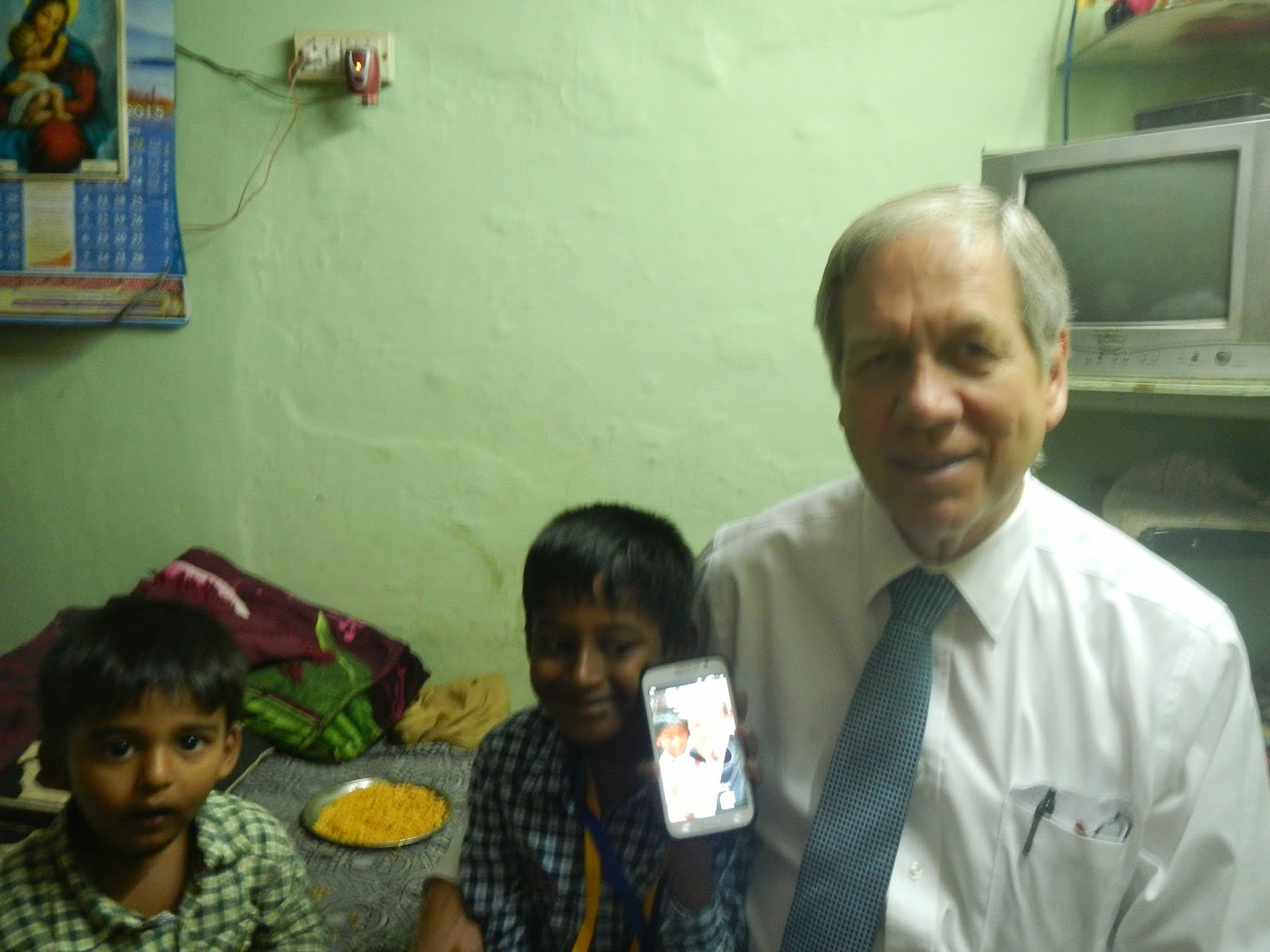 The boy I am with is named Jeffrey.  He is holding a picture taken with another Jeffrey on a recent visit to Bangalore.  I think I will still be at least in second place of other Jeffrey's that he knows. 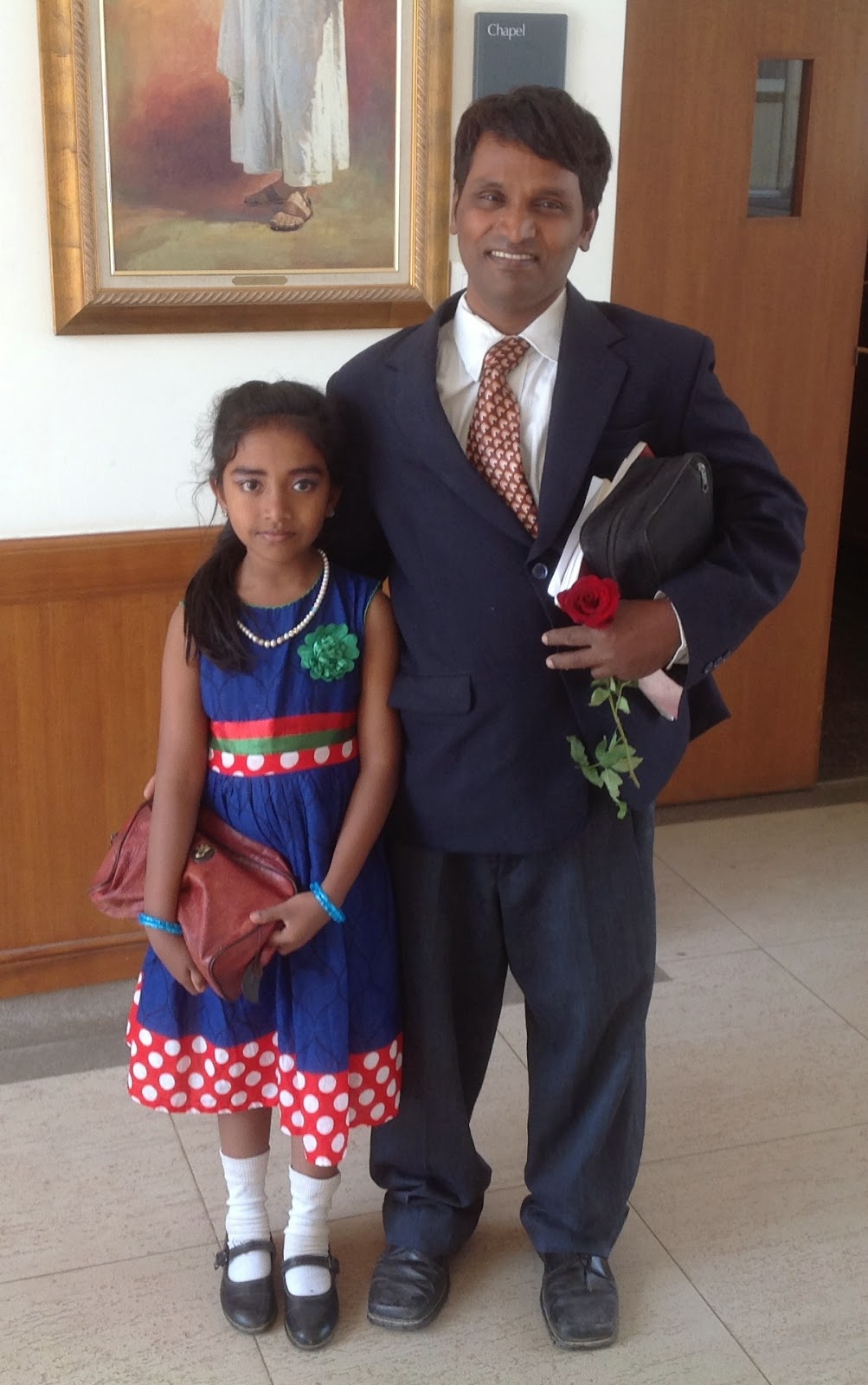 In the last General Conference, Elder Holland told the following story.  "A journalist once questioned Mother Teresa of Calcutta about her hopeless task of rescuing the destitute in that city. He said that, statistically speaking, she was accomplishing absolutely nothing. This remarkable little woman shot back that her work was about love, not statistics. Notwithstanding the staggering number beyond her reach, she said she could keep the commandment to love God and her neighbor by serving those within her reach with whatever resources she had. “What we do is nothing but a drop in the ocean,” she would say on another occasion. “But if we didn’t do it, the ocean would be one drop less [than it is].” Soberly, the journalist concluded that Christianity is obviously not a statistical endeavor."  This is brother Joseph, our Elders' Quorum President, and his daughter Marilyn.  He was one of those rescued by Mother Teresa when he was 2.

Loading the school buses is an interesting time in front of our apartment.  The parents stand and watch their kids until the bus leaves. 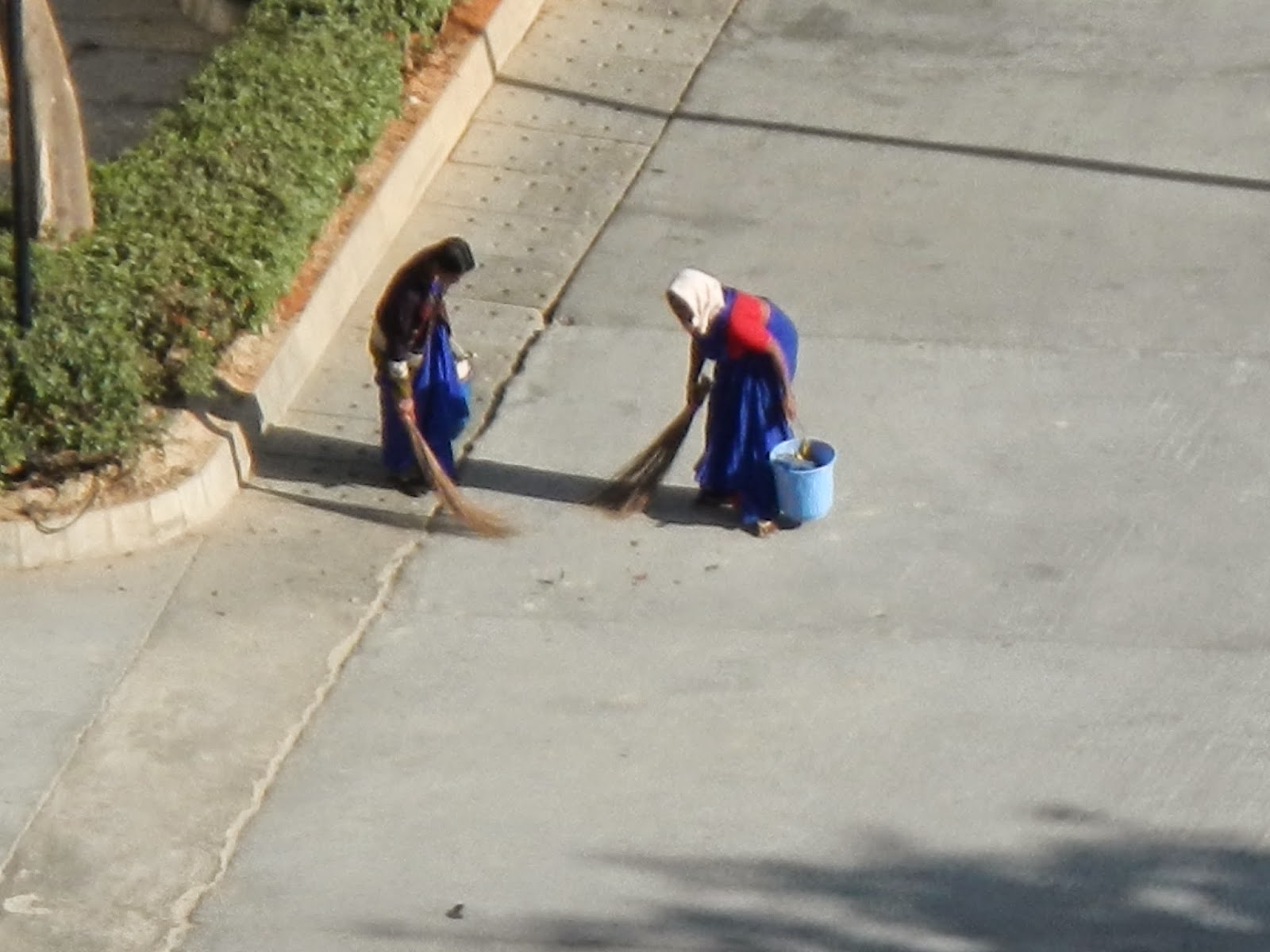 These (mostly) old ladies have a tough job. They sweep the streets and sidewalks with what appears to be home made brooms made out of reeds.  Unemployment would sky-rocket if leaf blowers were imported to India. 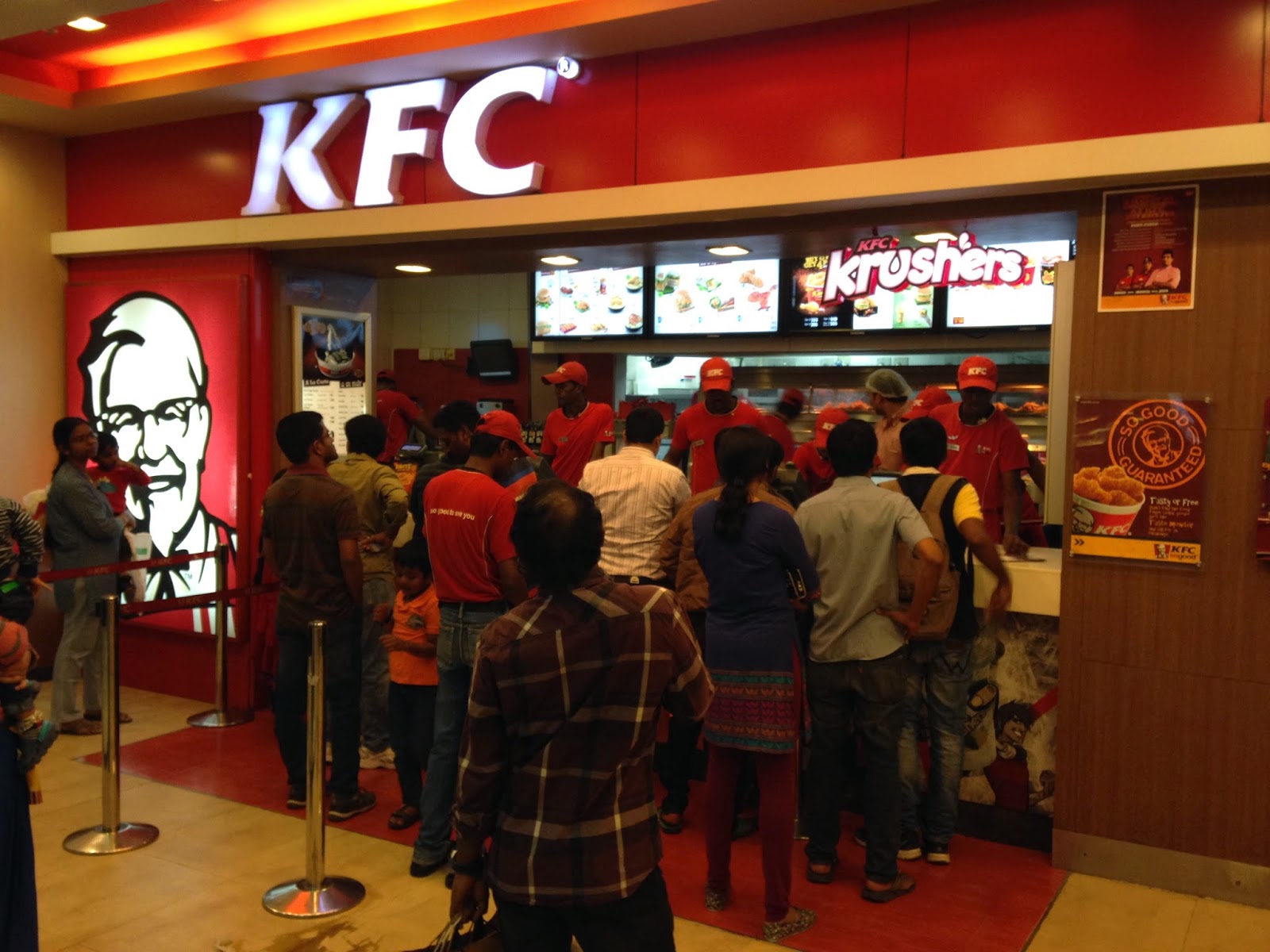 It is hard for me to believe, but KFC is usually the busiest restaurant at the mall.  We haven't tried it yet. 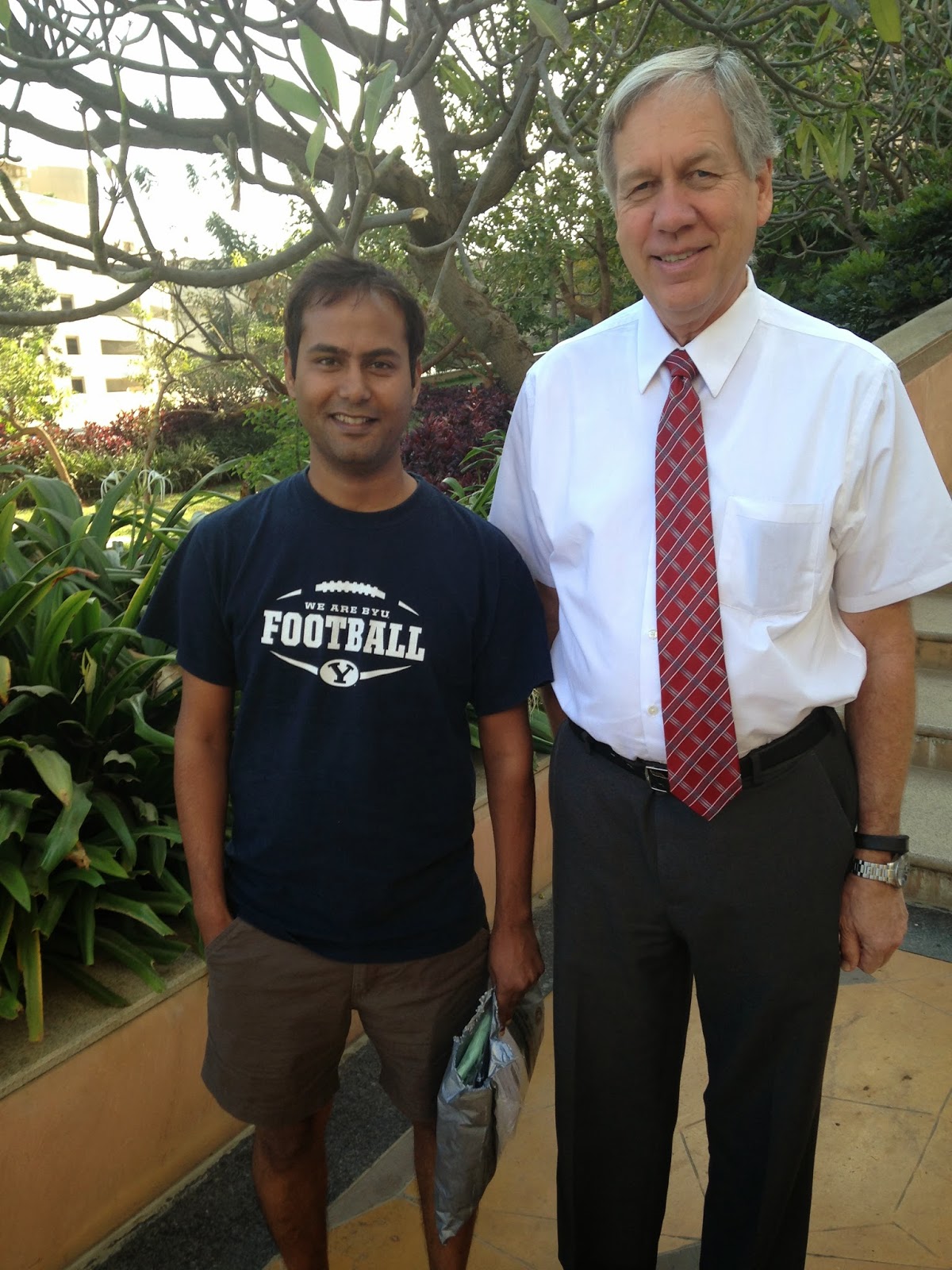 As we were walking to work one day, we were surprised to see an Indian walk past us with a BYU football T-shirt. Yes, there are some pretty smart people over here.  We had to get his picture.  He works for Novell, has been to Provo, and his boss brought special gifts to his Indian staff. 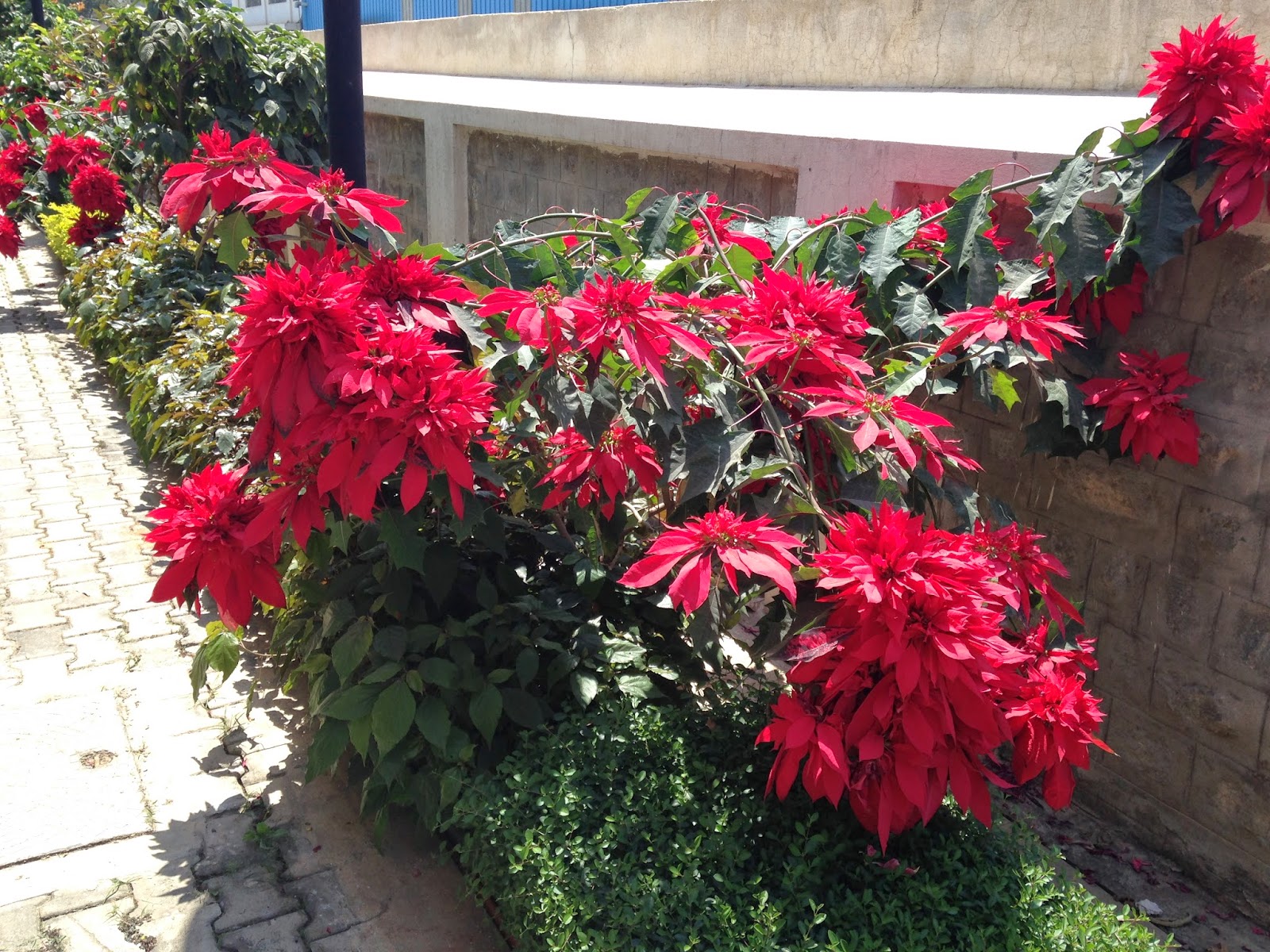 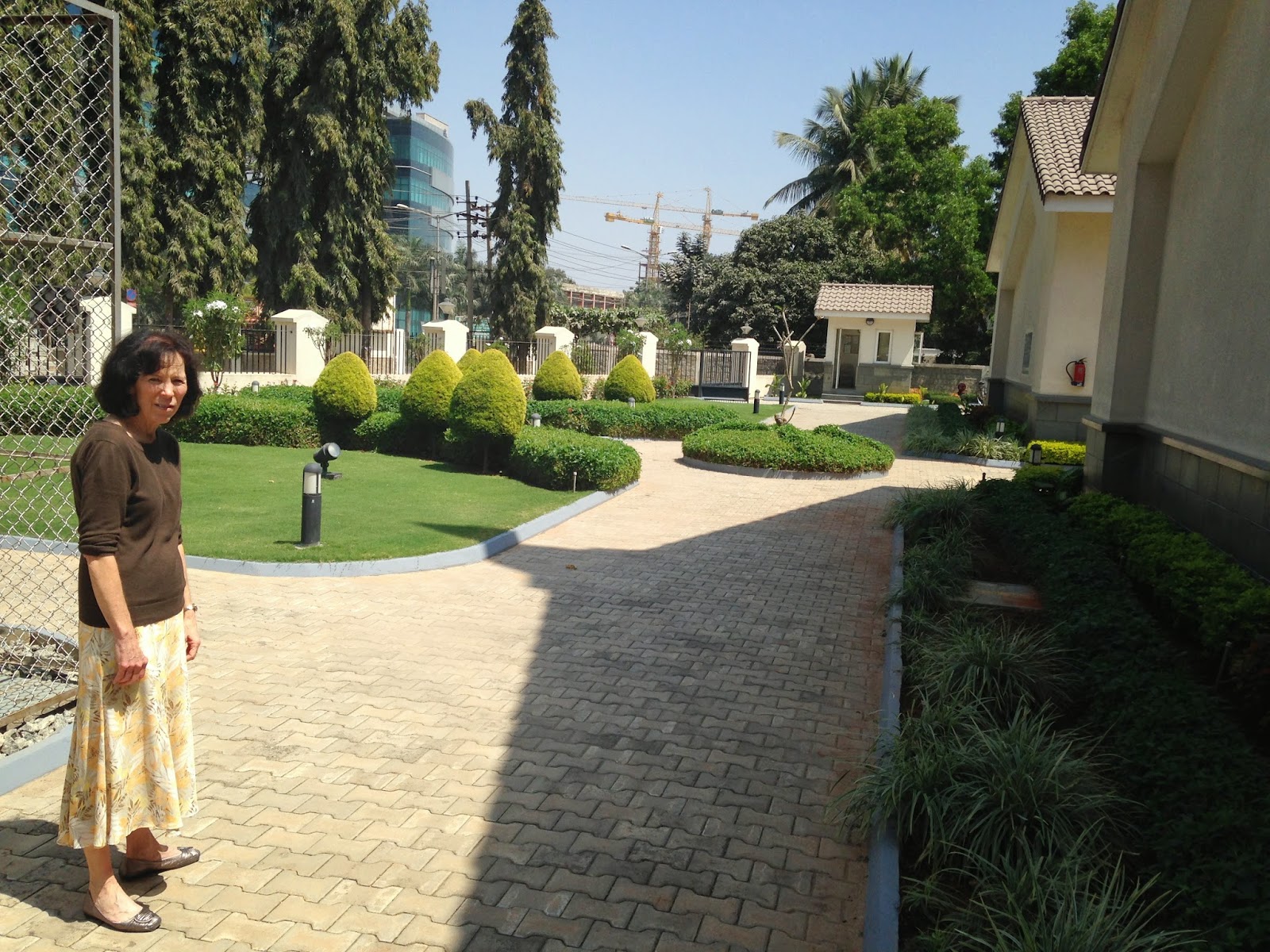 The grounds around the church are very beautiful and well manicured.  On the left is what looks like a poinsettia tree.  On the right are the grounds in front of the church. Too bad you can't really see them from the street. We saw the "army camouflage" bug as we arrived at work one day. 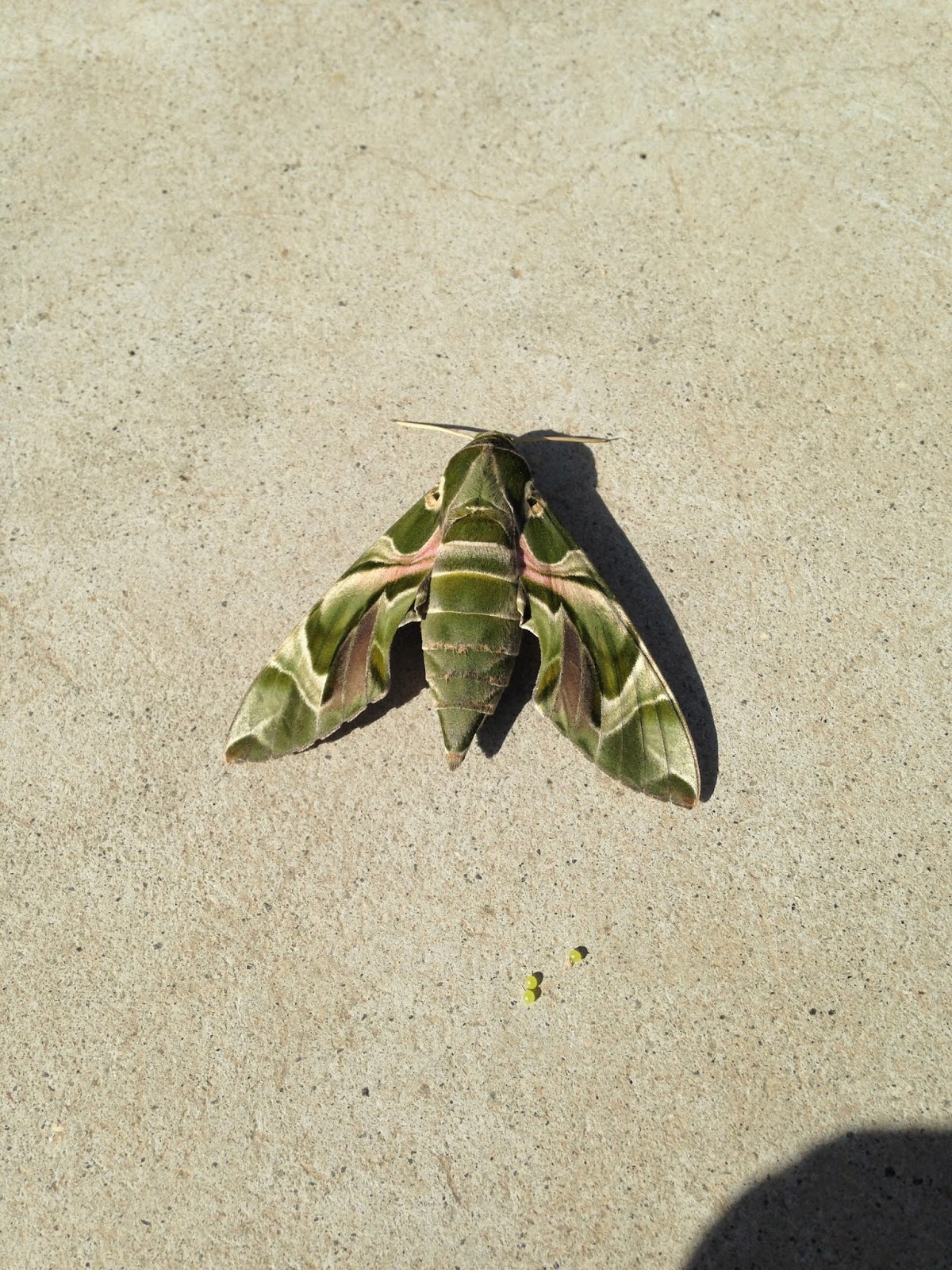 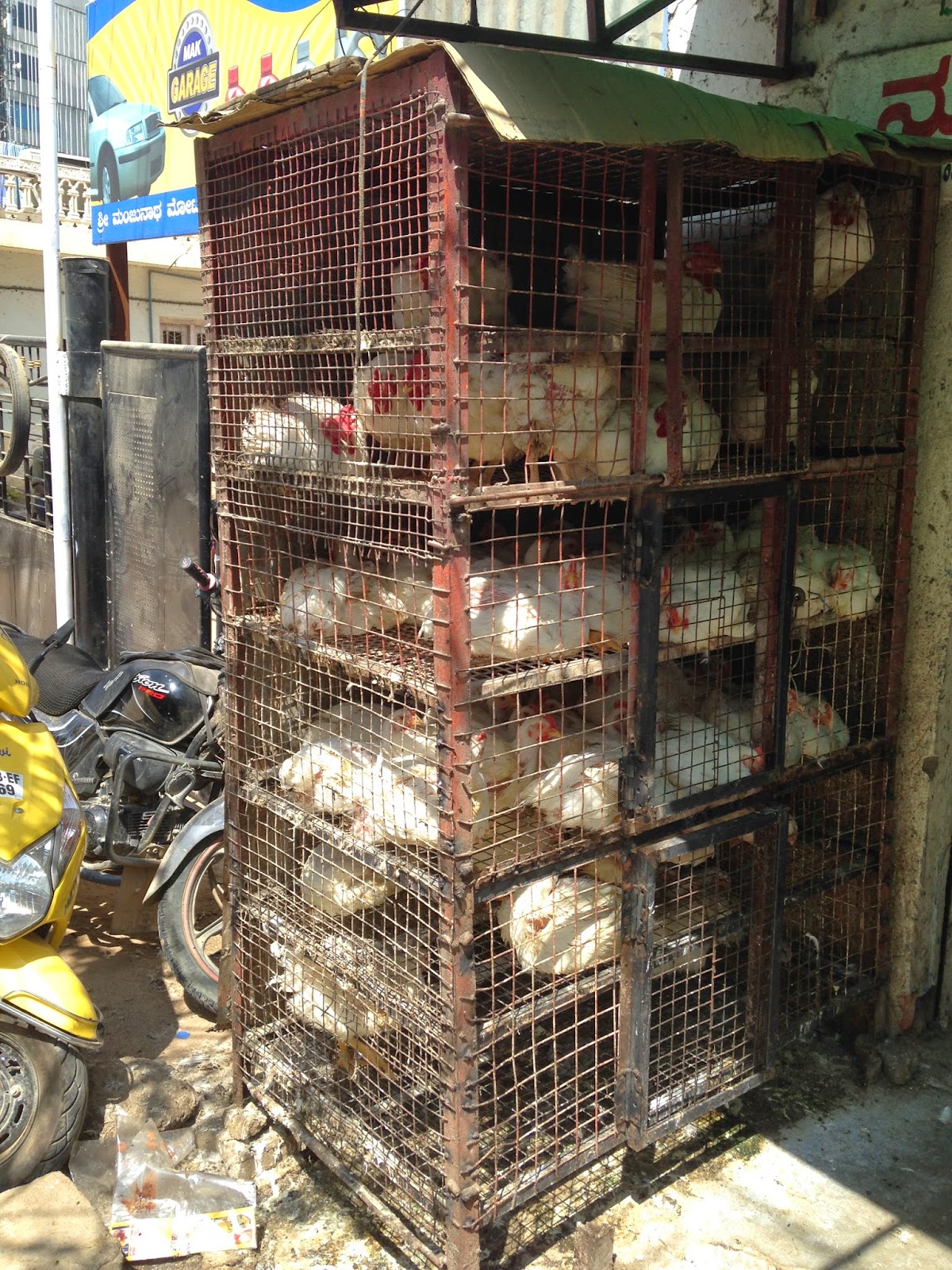 Here is the store where you can buy the freshest chickens for dinner. Just pick the one you want and they will get it ready for you to take home. 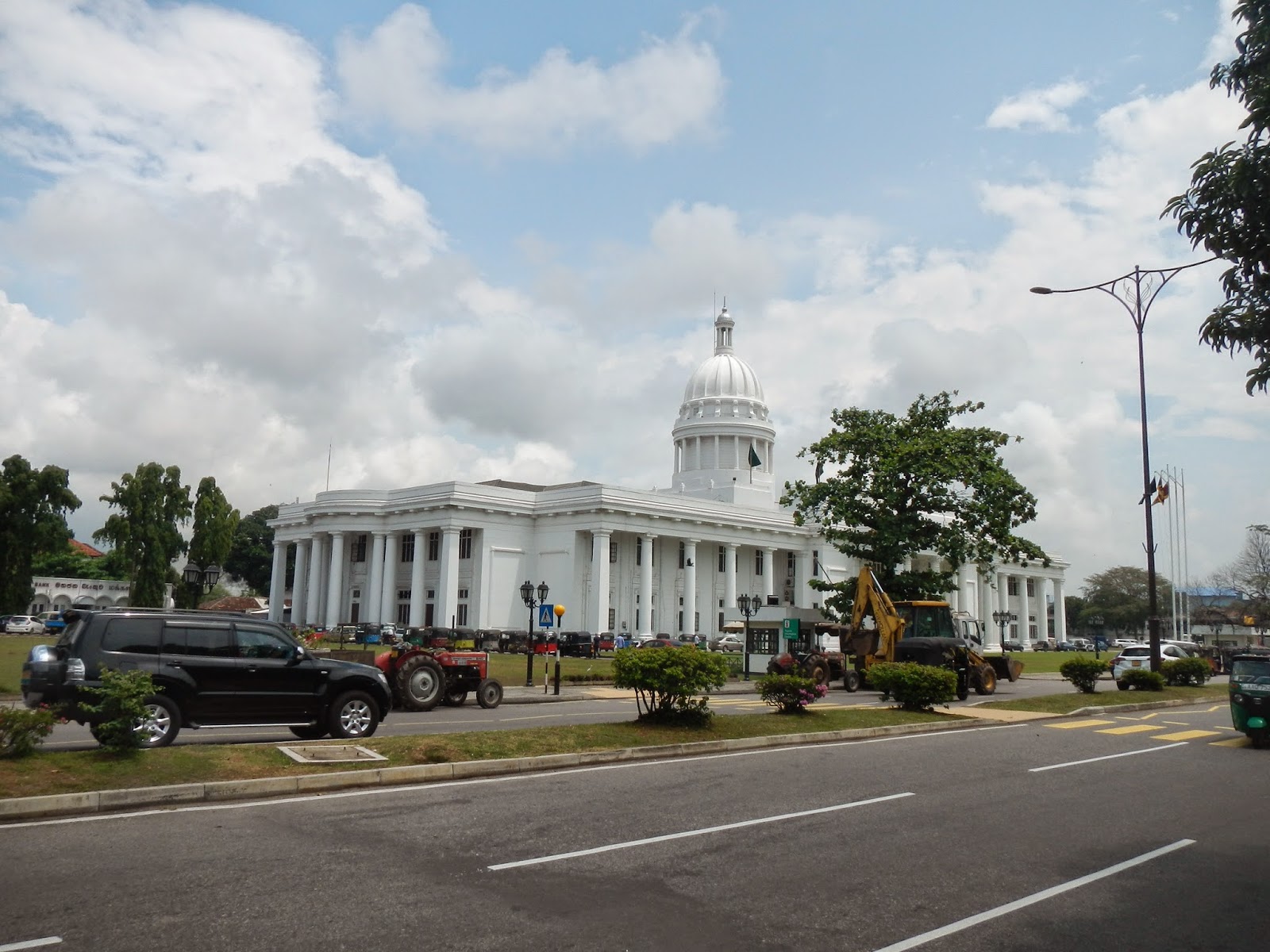 Here are some pictures of our weekend in Sri Lanka. This is the municipal center for Colombo, the capital. 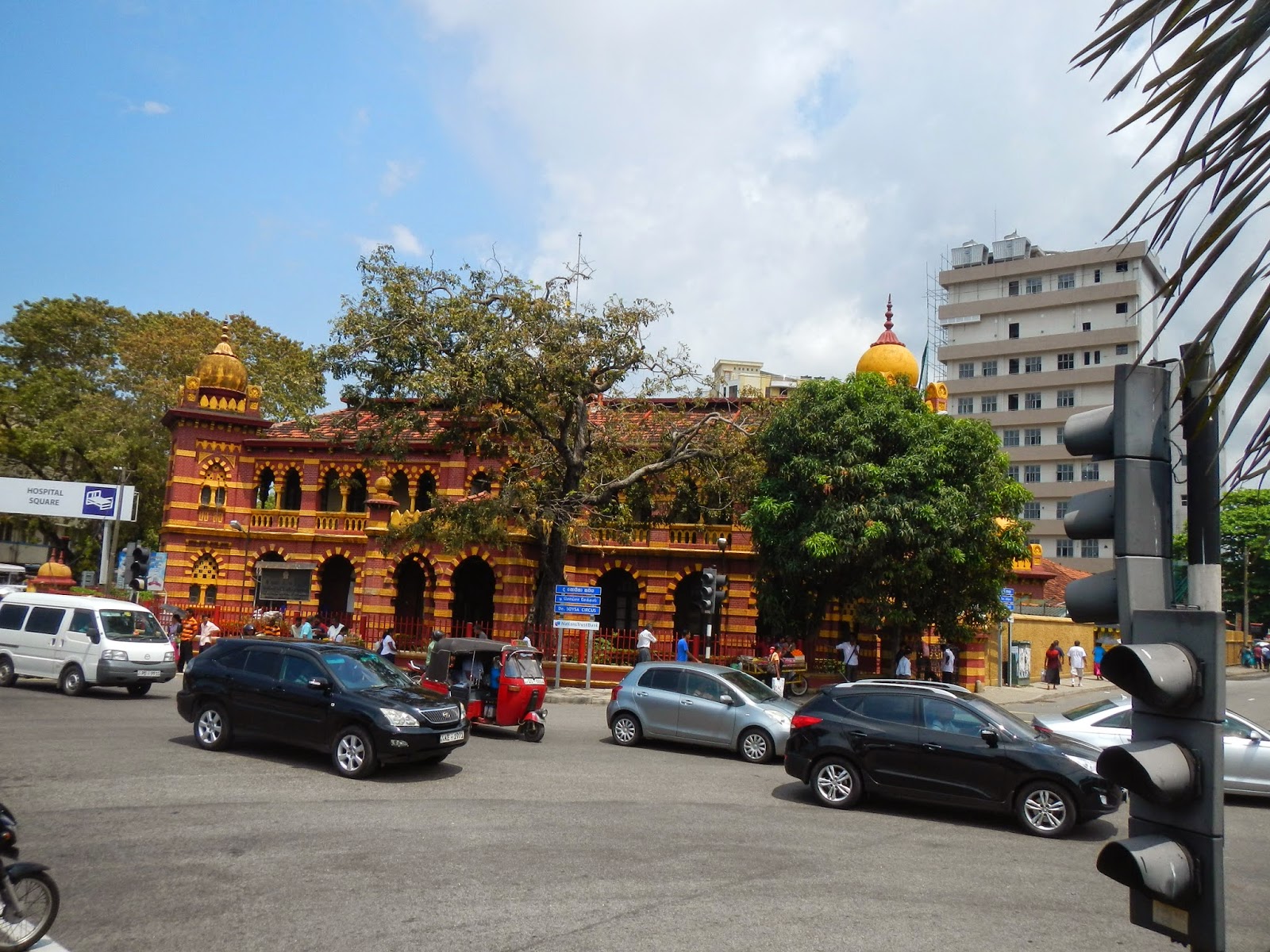 This is a hospital in the center of Colombo. 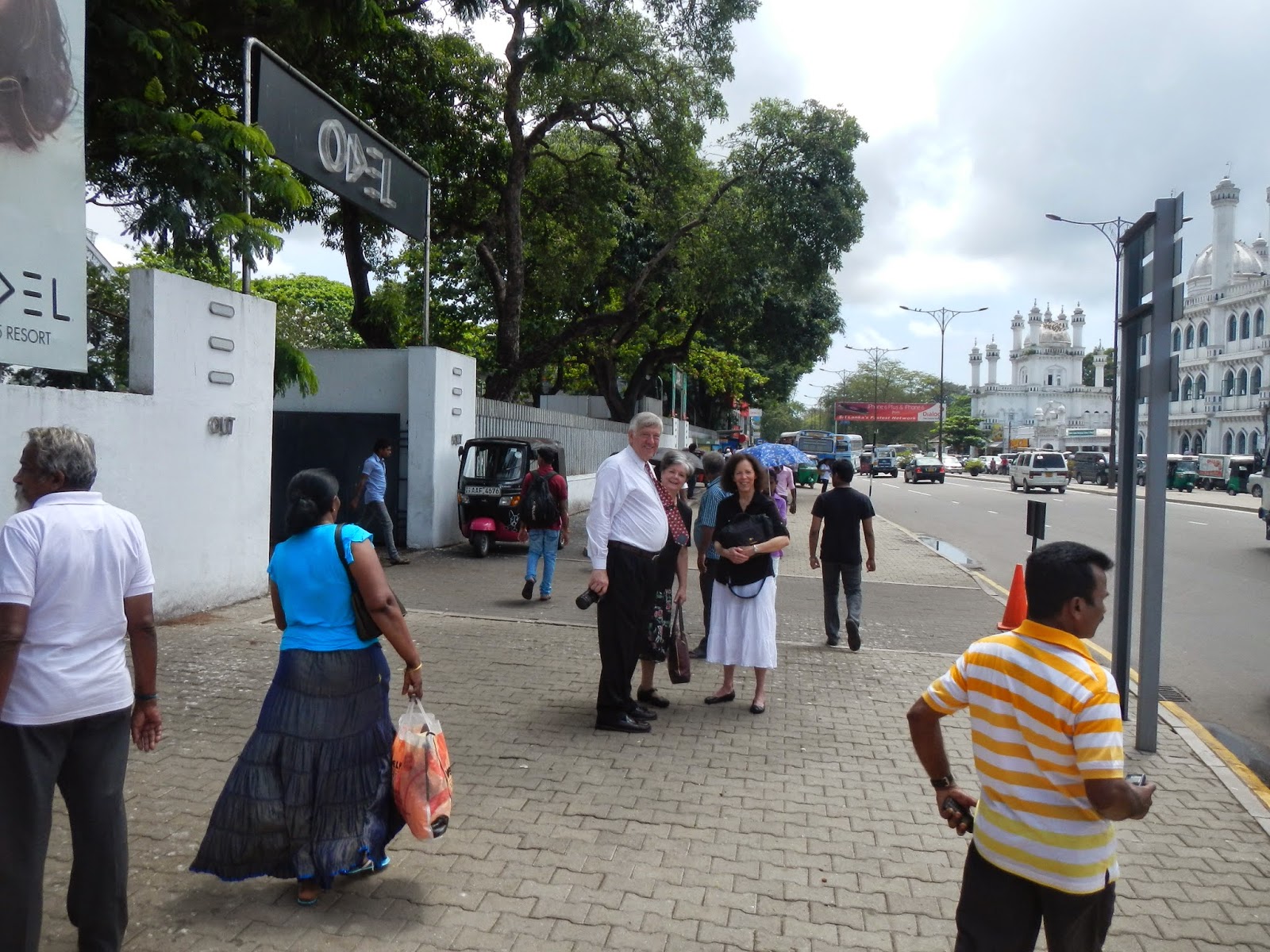 One difference from India is that they actually have sidewalks in Sri Lanka.  Overall, the infrastructure is a lot better. 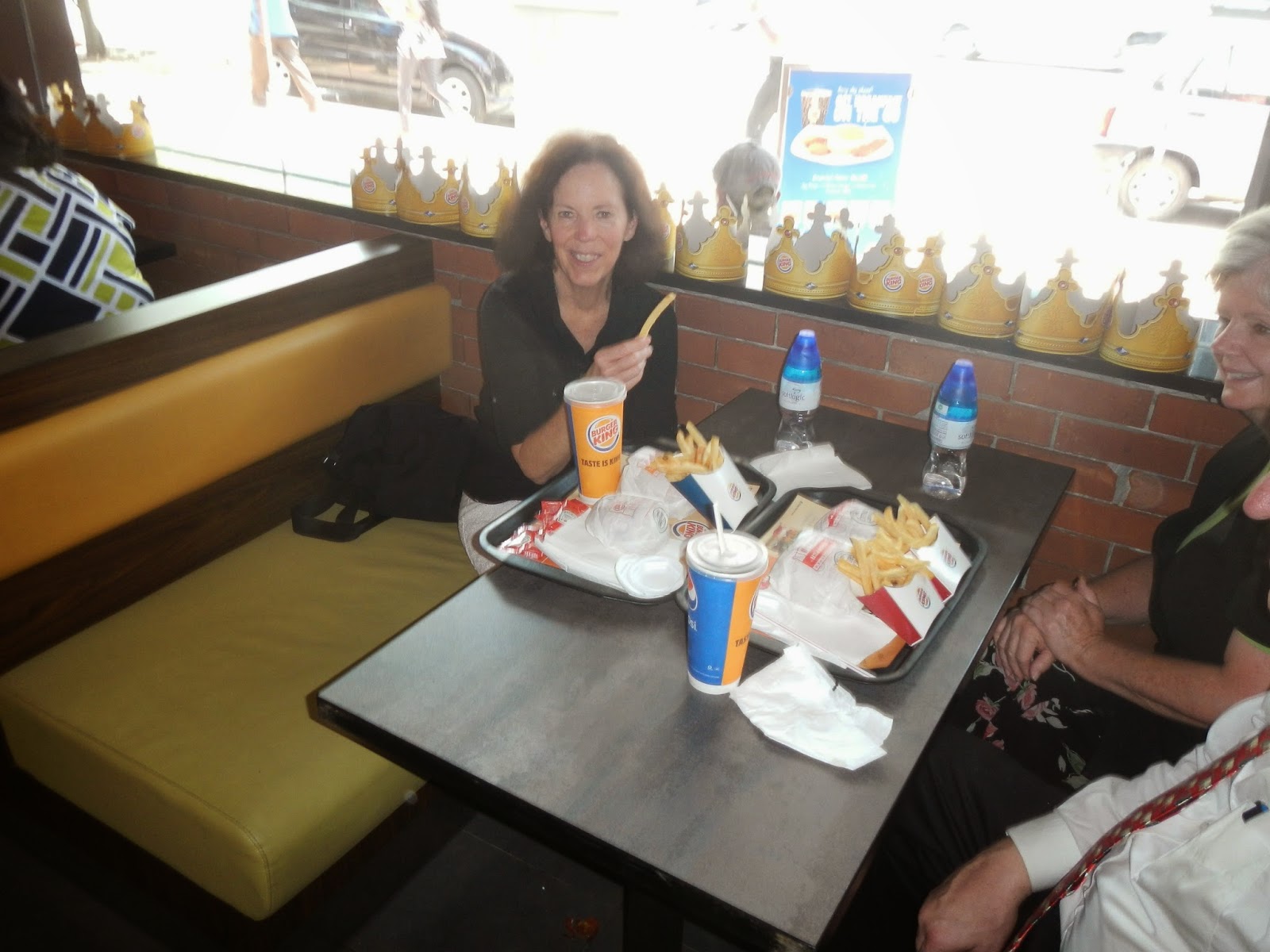 I can't remember the last time Sue enjoyed Burger King so much.  It was great to have an American tasting lunch of hamburgers and fries. We liked it so much, we invited the Elders to join us for dinner there again that evening. 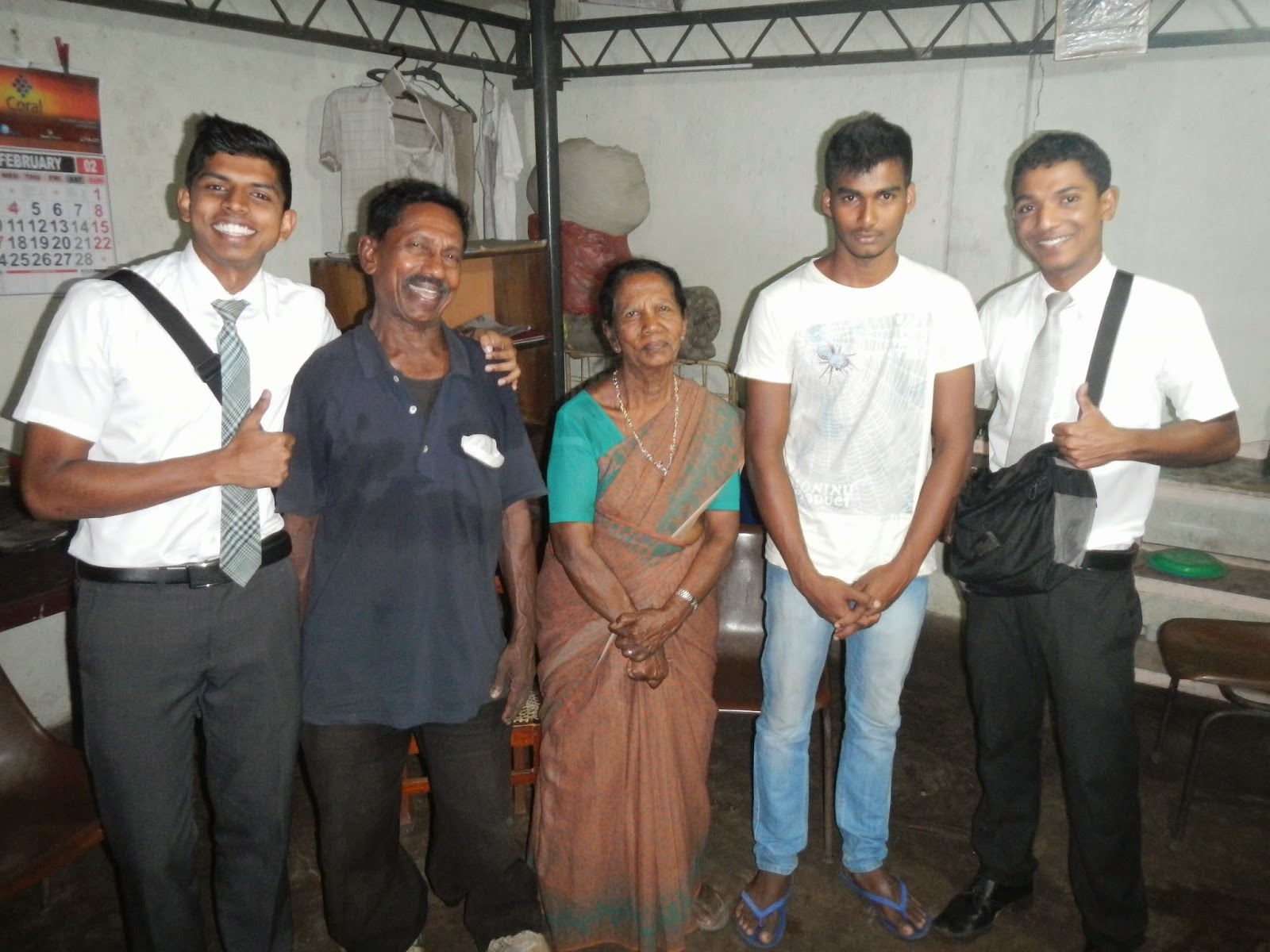 We got to go with the missionaries to a few families.  This one lived under a roof, but only two walls. 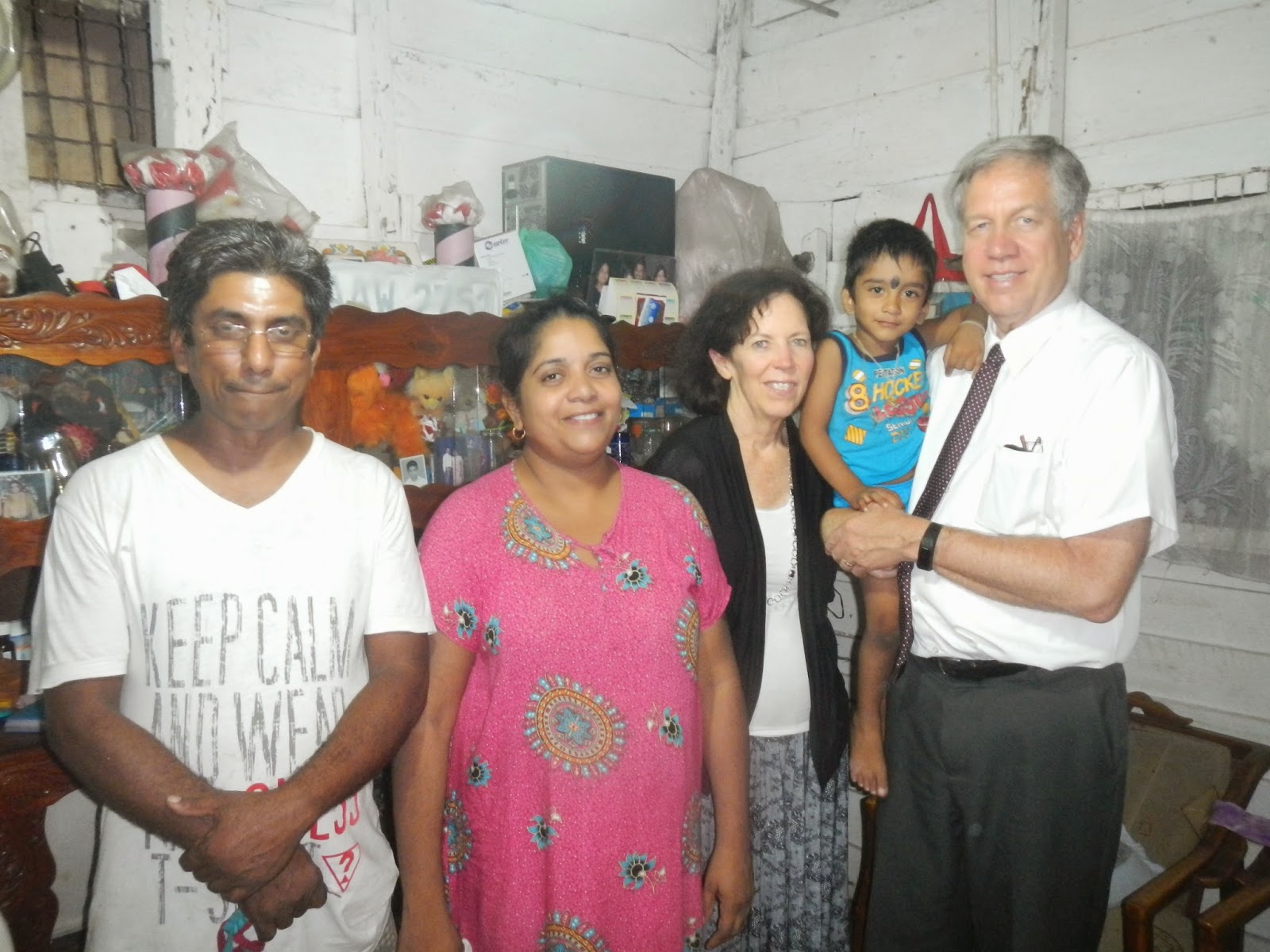 The little boy in this family, Heman, was a lot of fun.


The picture below is from the foyer of the church, with several of the families of the Colombo branch.  We enjoyed church with them on Sunday morning.  There are a lot of strong families in the branch. 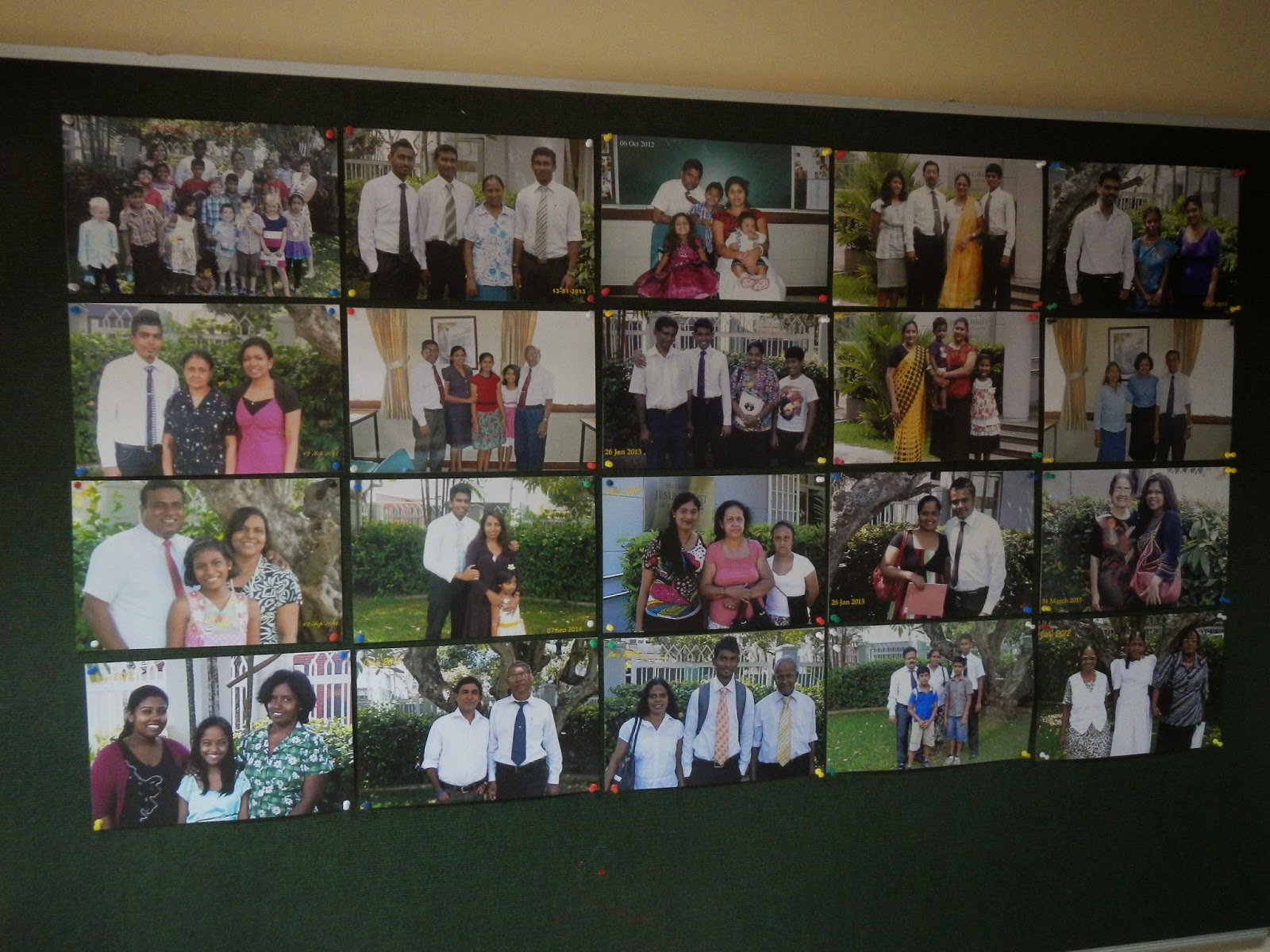 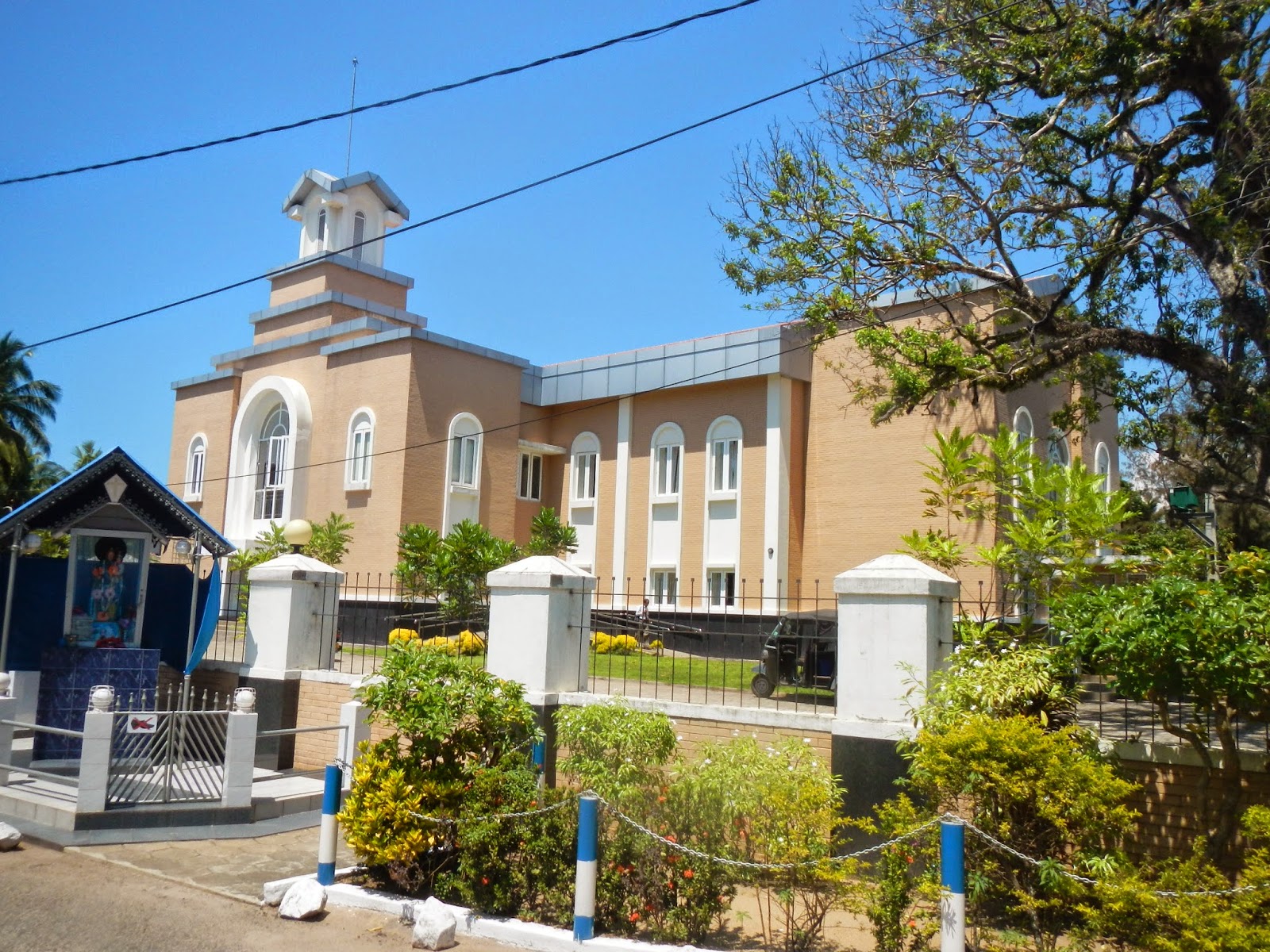 This is a picture of the other branch in Sri Lanka--Negombo.  It too had lots of great members. When the church bought the property, they had to agree to put a Catholic shrine out in front. 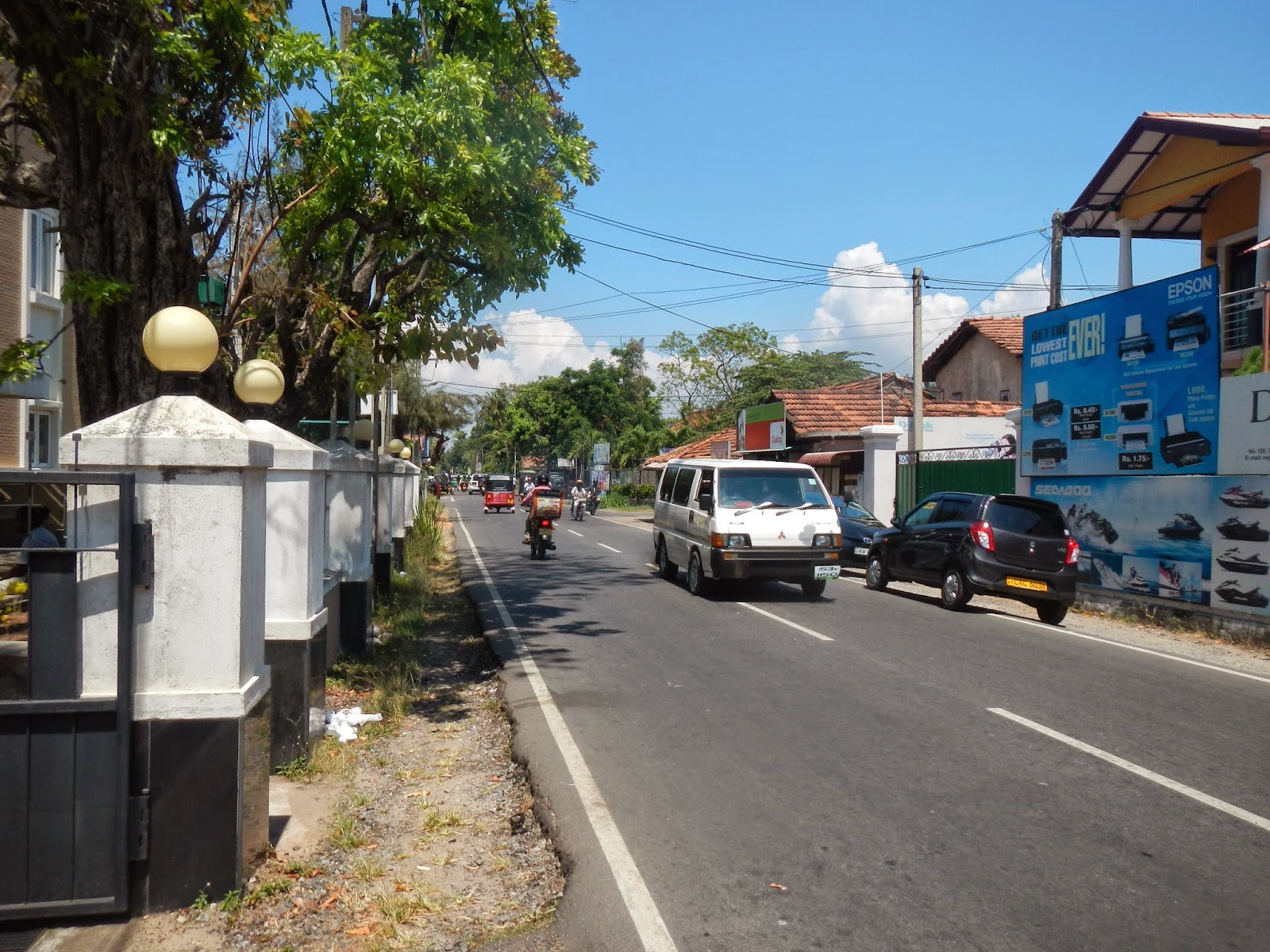 A view down a street in Negombo. 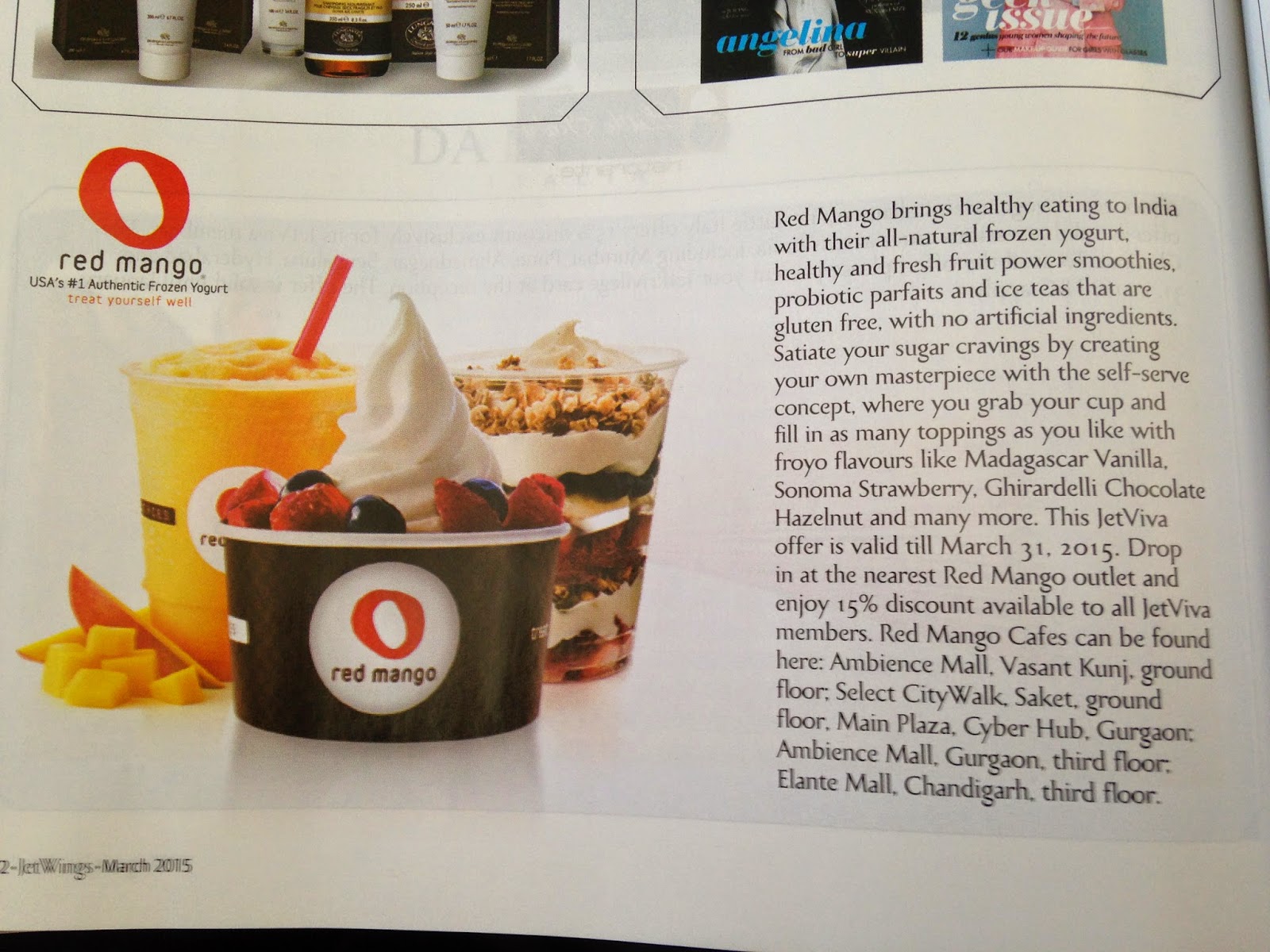 We missed our connecting flight from Chennai to Bangalore, so we had to stay overnight in Chennai.  But on the flight home the next day, Sue came across this ad.  We will either have to go visit Delhi, or hope Red Mango makes it to Bangalore in the next year.